“David Bowie was a master,” Langdon says, “…I discovered The Rise And Fall of Ziggy Stardust on vinyl when I was just fourteen. And it gives me a huge thrill to get to honor Mr. B. & to be a small part of this immense celebration of his life & work with these world-class musicians and everyone, who like me feels his energy alive and vital around me now just as it was then & forever shall be.”

Join us in celebrating David Bowie!  For tickets and more info, visit UCPac.org ! 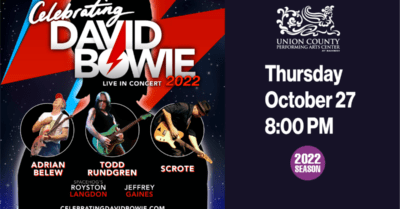